×
Recipes
Skip to content
Tags: keto diet
This post contains affiliate links, and we may receive a small commission if you purchase through our site.

If you are a person concerned about a healthy lifestyle, you have certainly heard about the ketogenic diet.

The keto diet is short for the ketogenic diet, a high-fat low-carb diet.

Consuming low carbohydrate foods makes the body function on ketones instead of glucose from carbohydrates. This makes your body burn fat for fuel, leading to weight loss.

However, we need to keep in mind that there may be some side effects at the beginning of a ketogenic diet, which is a rather drastic change in the body.

Some of these effects can be tiredness, stomach ache, dizziness, and even keto rash.

In the following, you will find out what the keto rash means, which is the cause and how it can be prevented and treated.

What is Keto Rash?

Keto rash is a rather rare inflammatory disease of unknown origin; the exact cause of the disease is not yet known.

The rash has the form of penetrating and high skin lesions. These lesions may be red, brown, or pink, depending on what stage the condition is.

Keto rash is similar to eczema or dermatitis and usually occurs on the neck, shoulders, back, chest, torso, axial areas, and very rarely occurs on the face and extremities of the body.

Like any other rash, the keto eruption may get worse if you try to do exercises, expose the rash to moisture, heat and rub it.

Fortunately, even if this rash is inconvenient, it is not life-threatening.

What are the Symptoms of Keto Rash?

Keto rash is a type of dermatitis that can occur in anyone, mostly in Asian women, according to studies involving young Japanese women.

Symptoms of rash may be:

Once the stains disappear, there are some brown markings on the skin;

Although several studies have been conducted based on keto rash, the exact cause of this condition has not been discovered, but there are some associated conditions such as Sjogren’s Syndrome, H. Pylori Infection, Still’s Disease.

Here’s a list of potential causes of keto rash:

Some researchers have liked ketosis and prurigo pigmentosa, but the exact cause of the disease is yet to be determined.

There is a link between cutaneous rash and the presence of ketosis, which occurs as a result of a restrictive diet, but can also be seen in diabetics.

It has been discovered that some people have had a rash after having undergone some diet changes.

Some also think other factors can aggravate this condition as well as:

Generally, the eruption disappears after one or two weeks. Very few people have the misfortune to experience this condition over a long period.

It is good to note that this rash will disappear if you address the cause and trigger factors.

How to Cure Keto Rash?

There are some ways to treat the keto rash:

How to Prevent Keto Rash?

Although the development of keto skin eruption is quite rare, you can prevent it through the following precautions at the beginning of the ketogenic diet:

Keto Rash is an unfortunate side effect of the ketogenic diet and it’s not very common. The exact cause is unknown yet, but ketone production is thought to trigger this condition of the skin but it’s we don’t know yet how the keto diet can cause this itchy rash.

Fortunately, there are methods to remedy keto rash, such as increasing carbohydrate consumption, anti-inflammatory foods, vitamins, minerals, and omega-3 supplements, avoiding skin irritation and proper cleansing. If none of these remedies work, it is advisable to go to the doctor.

The good news is that Keto Rash is rare and disappears if you follow the recommendations above. 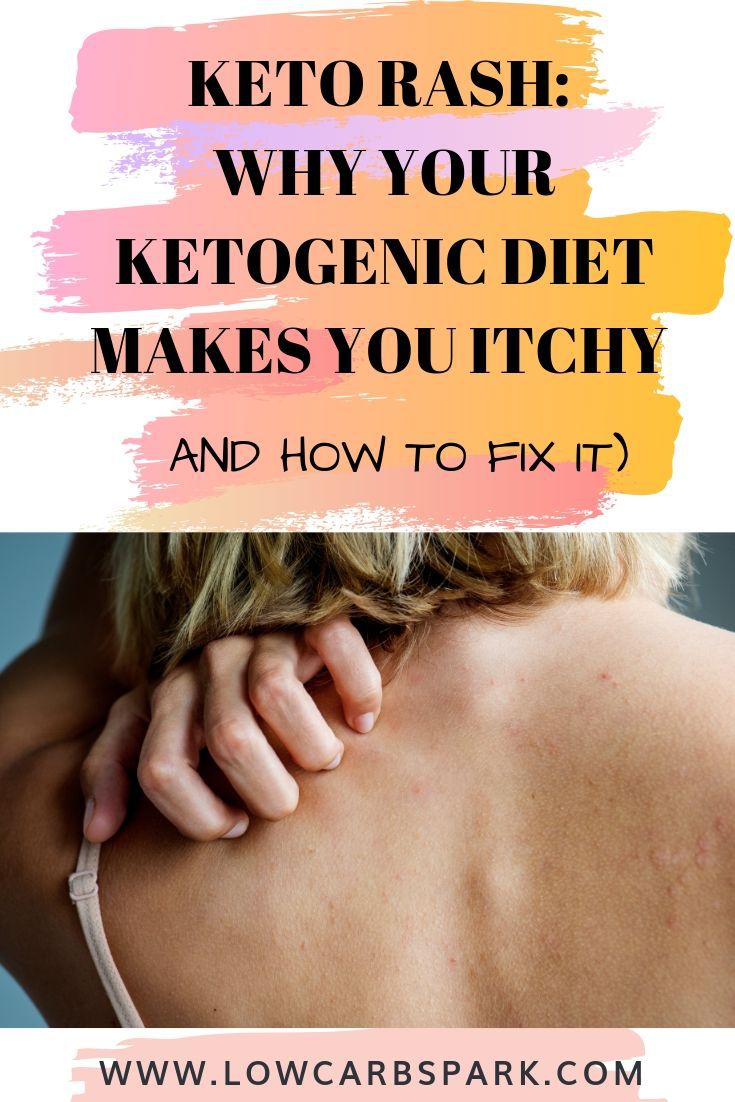